Dryophytes versicolor is a small gray tree frog that is common in the Eastern United States and parts of Southeastern Canada. This little frog is often seen in backyards and is one of the more common tree frogs across its range. Their tiny size and ability to change color can make them difficult to spot when they’re hiding, but you can find them if you listen for their loud calls and know where to look. In this article we’ll learn some more cool facts about gray tree frogs and look at a few pictures as well.

Let’s have a look!

There are over 800 known species of tree frogs in the world, and only a handful of those are found in the United States. The following list of tree frog facts are just about the gray tree frog.

1. There are no recognized subspecies of gray tree frogs

2. Gray tree frogs can change from almost black to almost white in color

Even though these frogs are usually gray, brown, or green, they have amazing color-changing skills. They change colors much slower than a chameleon can, but the ability to blend in and hide is their number one defense against predators.

4. They have a wide range from Texas to the east coast

Gray tree frogs are found from Central Texas north to Western Minnesota, then east all the way to the coast. Though they do not occur in southern parts of Florida or in Northern Maine. They’re one of the most common tree frogs in the eastern half of the United States.

Because of their small size, gray tree frogs feed primarily on small insects and other invertebrates. They most often eat flies, ants, crickets, beetles, moths, and snails or slugs. As tadpoles they are herbivores. Gray tree frogs often gather by porch lights at night to catch insects.

6. Like many other types of frogs, gray tree frogs can secrete a poison

Gray tree frogs are not venomous, meaning they do not inject you with poison by biting you. However, tree frogs can secrete a poison through their skin that acts as a deterrent for predators if their camouflage did not succeed. This poison is only mildly irritating to humans but you should still wash your hands if you ever tough a tree frogs and never touch your eyes afterwards.

7. Gray tree frogs breed in May

Females can lay up to 2000 eggs in batches of 20-40 eggs each. They will usually lay these eggs in small ponds and still water that does not have fish. The eggs will be tadpoles in 4-5 days which will be frogs in just 2 months.

They start out as herbivores when they are tadpoles. Though they are mostly insectivores as adults, they will also eat smaller frogs including other tree frogs or even their own eggs and tadpoles. 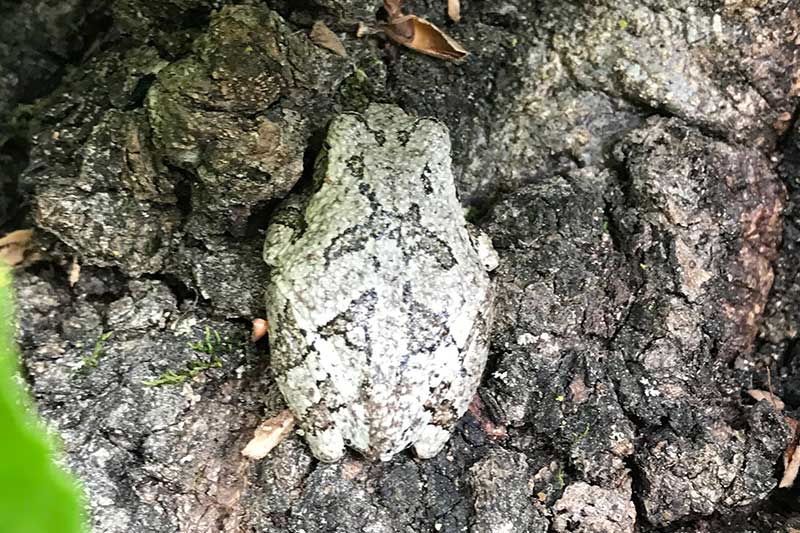 9. Gray tree frogs are small and only reach about 2 inches in length

Gray tree frogs are very small and only reach 2.5 inches maximum as adults, but often closer to 1.5-2 inches in length. This only aids them in trying to remain incognito and hidden from the world until nightfall when they come out.

Gray tree frogs remain hidden and still, usually high up in the trees during the day. At night time though they come down and the male’s call can be heard starting at dusk. This is also when they commonly look for insects and food.

11. The male’s call can travel for a third of a mile

You can hear the male gray tree frogs call from a third of a mile away and the sound up close can reach 108 decibels, that’s as loud as a lawnmower.

They congregate in the spring during breeding season, but other than that gray tree frogs are solitary animals that live their lives alone.