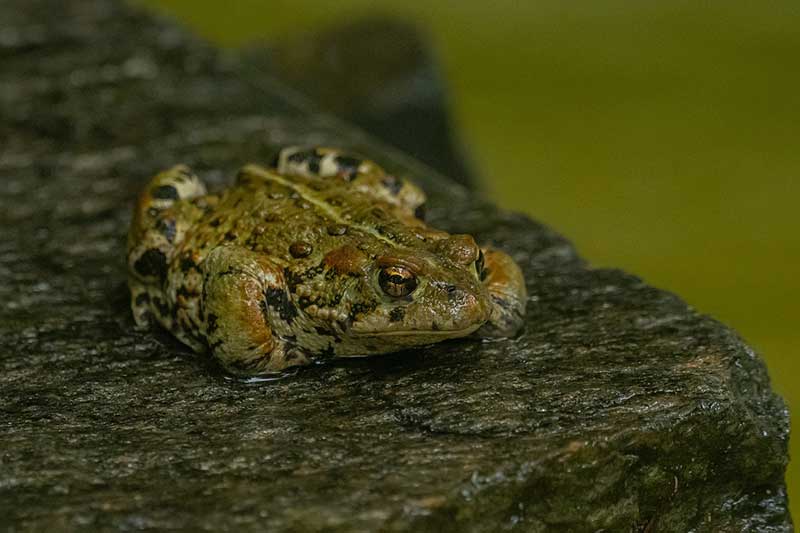 There are more than 4,700 frog species worldwide, except in Antarctica, and these animals are fascinating to find in the wild or have as pets. Frogs are tailless and short-bodied amphibians found in various habitats and known for their calls (or croaks) and ability to jump or hop. With many frogs and toads also having warty-looking patterns and bumps on their skin, there’s no surprise the age-old question and concern we have is: do frogs give you warts?

This article will explore this question and answer related concerns around warts from animals, handling frogs, and what we might catch from frogs.

Do Frogs Give You Warts?

The short answer is no. There are no amphibian species that can give you warts. Warts are caused by the human papillomavirus (HPV) that is only carried and transferred by humans.

The bumpy wart-like patterns on frogs and toads are glands that don’t secrete anything that can cause warts in humans. Instead, some frogs and toads can secrete other substances that may cause rashes or skin irritations, but not warts. Besides providing a defense mechanism, these patterns and glands also offer camouflage for them when hiding from predators and extra protection for their skin.

Is it Bad to Pick Up Frogs?

While it isn’t altogether bad to pick up frogs, you still need to take precautions when you do. Most of the time, it can be more harmful to the frog than you when you handle them frequently.

Frogs have what is called semi-permeable skin that allows them to absorb oxygen underwater. This also means their skin is sensitive and can easily absorb chemicals, oils, and salts from your hands. Before picking up frogs, make sure your hands are clean and free of soaps, lotions, detergents, and anything containing chemicals that might harm them.

You also want to be gentle when you pick them up. Squeezing frogs too hard can injure or kill them. Scaring them can also lead them to jump from your hands and become injured after a high fall.

Will Frog Pee Hurt You?

Frog pee will generally not hurt you. However, there are exceptions. Don’t let the urine get into your sinuses or bloodstream and make sure you wash your hands immediately afterward with soap for at least 20 seconds. Some frog pee can have bacteria in them that may lead to sickness. So make sure to monitor your health after being peed on as well.

If a frog pees on you, it typically means they are afraid, stressed, or trying to defend themselves from a predator. It’s best to put them down gently before washing your hands so you don’t accidentally injure them or stress them out further.

Can Frogs Give You Disease?

Some frogs will release neurotoxins or secrete mucus from their bodies. When ingested, some of these toxins can be deadly or cause hallucinations. Frogs can also carry bacterial, viral, fungal, or parasitic diseases that are contagious.

The most common bacteria found on frogs is the one causing salmonella. Be careful when handling frogs or interacting with their environment since the salmonella bacteria can be on their skin or in the water they’ve bathed. Salmonella infections can lead to:

Always wash your hands thoroughly for at least 20 seconds after handling frogs. Regardless of what you get on your hands as a result, the last thing you want is to get the substance into your sinuses, bloodstream, or body, such as by picking up food after.

How Can You Tell if a Frog is Poisonous?

While not all frogs are toxic or poisonous to humans, the ones that are can be significantly dangerous. The most poisonous frogs are the poison dart frogs from the family Dendrobatidae that contain a toxin called Batrachotoxin (BTX). BTX can lead to paralysis when it enters your bloodstream.

Frogs in the family Dendrobatidae are quite easy to identify as they are very colorful, have black eyes, and pointed noses. The deadliest to humans are those in the genus Phyllobates, especially the Golden poison frog (Phyllobates terribilis). This frog is bright yellow and believed to carry enough poison to kill two adult elephants.

Another thing to note is all toads have glands that can secrete bufotoxin. This milky fluid is a moderately potent poison that can impact your heart, be a hallucinogen, or constrict your blood vessels. Most toads can be identified by their stout body, short legs, and rough skin with warts.

The general rule of thumb is, the more colorful the frog the more likely it is poisonous, and if you aren’t sure take extra precautions such as wearing gloves. Also, always wash your hands after handling toads or potentially poisonous frogs!

Do Any Animals Give You Warts?

Although warts are contagious, they can’t be spread from animals to humans. The human papillomavirus (HPV) that causes warts is only contagious from humans to humans. There are over 150 types of HPV, and people with different immune systems react differently to the virus, with some developing warts and others not. Overall, children tend to be most vulnerable.

Animals typically have their own type of virus that causes warts in them, which isn’t contagious to humans. Instead of causing warts, animals have helped us find cures for warts. For instance, the cottontail rabbit papillomavirus (CRPV) that infects rabbits was used by scientists to help create the HPV vaccine for humans. So if you encounter an animal with warts, it is most likely the virus causing those warts is unique to infecting their species.

While frogs can’t give you warts and their pee is generally harmless, you still want to be cautious when handling frogs. Make sure the frog isn’t poisonous as the toxins on their skin or secretions can lead to other ailments. Also, always wash your hands because frogs can carry diseases, such as salmonella.

Last but not least, be gentle when you pick up frogs and have clean hands because they are more sensitive animals than you might initially assume. With these precautions and knowledge on identifying poisonous frogs in mind, you are set to handle frogs safely!